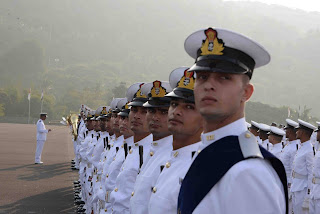 Profile:
The Indian Navy (IN; IAST: Bhāratīya Nau Senā) is the naval branch of the Indian Armed Forces. The President of India is the Supreme Commander of the Indian Navy. The Chief of Naval Staff, a four-star Admiral, commands the navy.

The Indian Navy traces its origins back to the East India Company's Marine which was founded in 1612 to protect British merchant shipping in the region. In 1793, the East India Company established its rule over eastern part of the Indian subcontinent i.e. Bengal, but it was not until 1830 that the colonial navy was titled as Her Majesty's Indian Navy. When India became a republic in 1950, the Royal Indian Navy as it had been named since 1934 was renamed to Indian Navy.

Place of work: All Over India

Graduation details: Degree, Post degree. Based on role that qualification will be changed

Procedure to apply
1. First of all you have to visit Indian Navy Careers Page at official website to www.joinindiannavy.gov.in
2. Refer and  open Notification
3. Read the Advertisement to know full details
4. You must doNew Registration
4. Mention Academic Qualification & Other Related Information as per the instructions
5. Verify all information provided is correct
6. Submit the application
7. Take a print out of Indian Navy Recruitment 2017 online application form